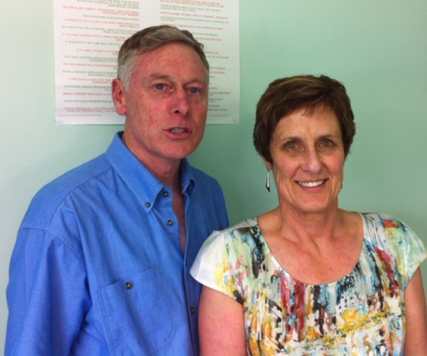 Ian and Dianne Hackett have been in business 38 years in MILFORD come November. Their story is yet another interesting and compelling reading, when we look into the history of local businesses.

Ian is a local lad, attending Westlake Boys High School until he left in 1969, then dabbling in a few different jobs before getting an apprenticeship in panelbeating. Dianne, is another local lass from Northcote, who attended Westlake Girls High School around the same time but that’s not where they met. No - it was MILFORD’s iconic Surfside dance hall where their eyes caught each other’s across the dance floor, and there began a romance that has lasted decades.

After completing his apprenticeship, and marrying in 1974, Ian and Dianne took their big OE between 1976-79. On return, Ian was itching to have his own business and found a piece of land behind the main shops in Shakespeare Rd with a tumble-down old shed. He purchased this property in 1981 and set about building new premises with the help of his block-layer brother and other trade friends. In November 1982, Milford Panelbeaters and Painters Ltd, opened its doors for business.

Since then the business has become synonymous with the quality of it’s repairs. Ian gets self-satisfaction from knowing that each repair has been done to his exacting standards. Every vehicle gets a quality control check before it rolls out the door.

In fact, when Ian & Dianne joined the Car Pro panelbeaters group, about 20 years ago, a ceremony was held at their premises with the Minister Of Trade & Industries on hand to present them with their ISO 9002 certification – as the Car Pro group was the first to obtain this in their industry.

During this time, Ian & Dianne settled down and had a family – the perfect match – a girl then a boy who have been brought up in and around MILFORD. Dianne continued in her role of survey drafting with Lands and Survey until the pitter-patter of little feet.

Dianne nowadays enjoys the gym and walking – often being seen walking streets around Milford, with Ian in tow. Ian is active in the Takapuna North Rotary, having served as a Past President and given the business he is in, painting all the vans for the Kiwi Harvest food initiative set up by Rotary. He also served as a Board Member on the Milford Business Association for the 1st 4/5 years since it’s rebirth, realising that a strong business association was good for the well-being of the businesses in it and the local community.

Ian was a member of the Milford Tennis Club for many years and the business used to sponsor the Chelsea Cup Tennis Team at the club.

There is a tight-knit staff at Car Pro MILFORD, so when Covid19 first appeared, they sat down and discussed how were they going to keep going in the uncertainly of the pandemic. In typical Kiwi No.8 wire style, the idea was born to obtain a classic car to restore and resell later, so there was still work for the team. 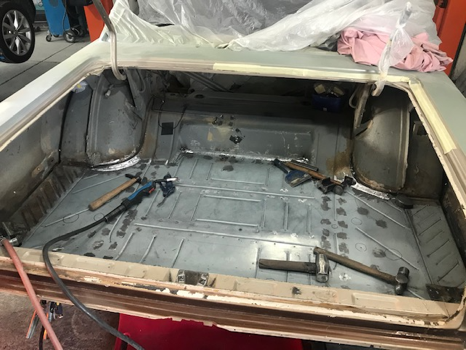 Not only did that work well, Ian has purchased new equipment so the team can bend metal & form new panels, as you will see in the picture of the new boot floor being installed.

All the creases are hand-crafted on-site. Not only has this given the team and opportunity to work on cars made of real steel but Ian is hoping to expand this new side of his business to future-proof it. Great thinking TEAM!

The car they are restoring was in pretty good condition to start with, as you can see from this picture when it first arrived. It’s a 1966 Plymouth ‘Sport Fury” 2 door hard top with a318cu inch V8. The restoration will see the car restored to most likely better condition than the day it left the factory –such is Ian’s perfectionism with his trade and the enthusiasm of staff working on the project.

I’m asked Ian to sum up why his business is successful and has lasted the test of time – 38 years in November this year! CREDIBILITY – was the answer. He continues to get repeat custom from the quality of the work. 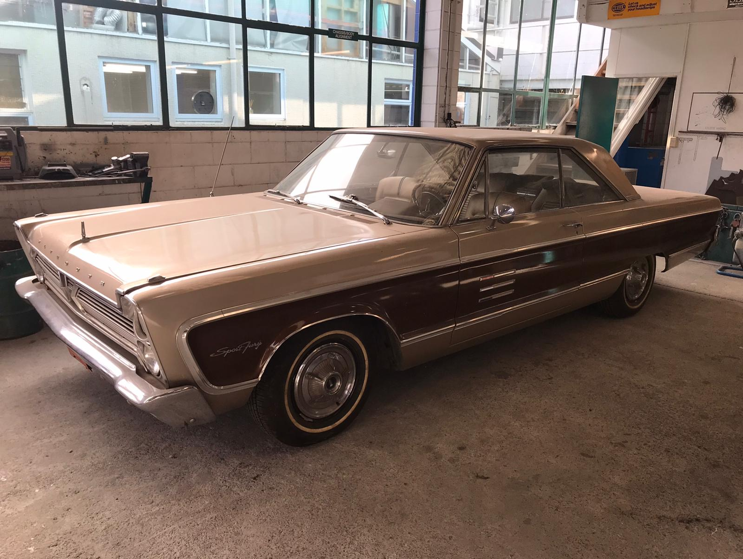 Even his detail in managing the business is so simple but so effective.

Every new job that comes in, he asks the customer how they heard about Car Pro MILFORD. This enables him to see if advertising he does works. And he is always about somewhere on site – always accessible to his valued customers.

I mentioned at the start that Ian was a local lad, through and through. As it turns out, his grand parents lived in Commodore Parry Rd and ran the tearooms on Milford Beach after WWII. And his Auntie ran a café in the main street. Kitchener Rd, called Dot’s Cafè where he remembers spending many an hour outside on the back steps playing cards, whilst his mum helped Auntie cook meals.

A true Milford couple – Ian and Dianne Hackett – are ensconced for ever as part of the fabric of the MILFORD community.